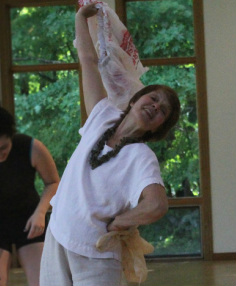 Libby Nye danced with the José Limón Company and American Dance Theater at Lincoln Center. She directed and choreographed for her own company in New York, and has taught and reconstructed Limón works throughout Europe, Canada, and the United States. Ms. Nye has taught at the Juilliard School, the Alvin Ailey American Dance Center, and the José Limón School along with colleges and universities throughout the United States. She has coached the José Limón Company, developed the dance major at Pomona College, and has taught on the faculties of Connecticut College, Harvard University, The Boston Conservatory, and Brown University.  She currently teaches at the Eastern Connecticut Ballet School and has just returned from Germany where she taught at the Folkwang University of the Arts.